The concept of the Traditional Chinese Medicine implies that the body’s vital energy Qi, is running through the body along the meridians where they branch out to the organs and functions. When there is an imbalance, the respective organ system will be treated with fine needles at the respective meridian point. For acupuncture weight loss, the choice is ear acupuncture, as the most important points are situated in the ear.

Obesity can be treated with acupuncture and in combination with the proper diet and exercise, it does produce promising results.

A noticeable weight reduction of 75% from the patient have an effect after treatment. Even the „diet resistant“ who tried several diets with no positive outcome or those with lack of perseverance should take advantage of the Ear acupuncture as an additional form of therapy. As an American Study reveals that it is a supportive adjunct therapy for Obesed patients. (Source: A. Kuruvilla, Acupuncture and Obesity).

How does acupuncture work

Ear acupuncture has been introduced since 1951 by a French Doctor, Paul Nogier, who found out, that the ear represents all parts of the body. One reason, why the body reacts so fast on the ear acupuncture is, that the brain is closer to the stimuli. 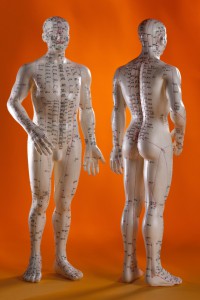 There are two different techniques, while one says, that only one needle should be used, where the needle is placed on the hunger and appetite point, the other method advices five needles on different points.

As soon as the doctor found out, where the needles have to be placed, the patient will get the needles, which will be at least 1 millimeter out of the skin and fixed with a plaster. They will stay in the ear for at least 10 days, depending on the patients results.

Acupuncture for Weight Loss can influence your Body with following reactions:

Ear acupuncture alone does not show an effect, you have to combine it with diet and exercise, but it does help your metabolic system to work faster, the benefits are a weight loss.

Traditional Chinese Medicine exists more than 2000 years and includes various forms of therapy like herbal medicine, acupuncture, massage and exercise just to list a few. In the 1950s, the Chinese Government reintroduced the TCM and included some roots of the western medicine with anatomy and pathology.

A small study has been published in the journal Acupuncture in Medicine in December 2013.

According to the TCM, the body’s vital energy, the Qi, is running through the body along the meridians which serves the whole system including the organs. If an imbalance exists, it can be adjusted by balancing the respective element, metal, wood, fire, air, with the right nutrition as well as with acupuncture or other forms of Chinese treatment.